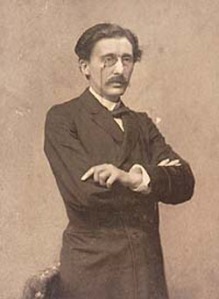 Gabriel Tarde‘s work has become increasingly important as many theorists of society and culture have been turning to more nuanced approaches to social ontology that do not prioritize perceptions of solid, bulky things like ‘societies’ over micrological and effective differences.  Tarde was the original inspiration for Gilles Deleuze and others to affirm the ability of associations to produce significant and persistent social effects, coaxing those who promote the theme of ‘modernity’ to ground their celebrations of innovation in a more critical understanding of power in everyday life.

Here is a preview of a recent article I wrote on Tarde, modernity, and difference:

“Most of social theory is, in fact, rooted in the notion of one modern rupture, and in the end it is by means of contrast with the mainstream viewpoints on this rupture that Tarde’s Monadology and Sociology can best be summarized. In his book The Questions of Life (2002), European philosopher Fernando Savater relates the mainstream story of a human- kind undergoing modernization. It begins with humanity’s humbling, through the energy of Copernicus, who with his provocative observations and calculations finally shattered our sense of being at the centre of a universe inwardly arranged around us by a supreme creator. Thus began a long series of indignities and sacrifices and the identity of Europeans as actors who go out into the world. Constant cravings for new experiences, new bridges to new lands and new sensations, the compression of the world, politicization, dispersal, an oddly shared individualism, and worry about lacking a home seem inevitable consequences of a people in thrall to their mission of growing the scope of their actions and their selves. It is a common, albeit Eurocentric, story of the origins of the modern project that all can recognize, and many have expanded upon. Its key element is the constant fated repetition of a scene of humiliation for pretenders to irrational power, combined with the moral lesson of the need for the sacrifice and imperfection of a social contract. For some who may now read Tarde, there will be a strange sensation of absence of these figures of humiliation and sacrifice. But Tarde nevertheless raises a real need with his fundamental question: how does Leibniz’s Monadology allow us to rethink the nature of individuals in a way that makes them useful again to themselves, not as privileged, humanized subjects, but as actors seeking order? Can we eschew the modern myth of sacrifice, humiliation, and the lowest common denominator, and realize a more vigorous scientific conception of active social life?”